“Everything that has been disseminated for free this past year has been excellent. Gartner and Forrester material is either dated, too high level, not believable, or tailored to small companies only.”

This comment to the Analyst Value Survey from a senior manager in one of the world’s biggest enterprises really struck the same note as many other users of analyst services. While some analyst firms are seen as hard to work with or increasingly rigid, for example Gartner with workgroup pricing and limiting the ability of clients’ colleagues to listen in on calls, some other firms are seen as being easier partners to work, having more actionable insight, or compelling (dare we even say entertaining) content. 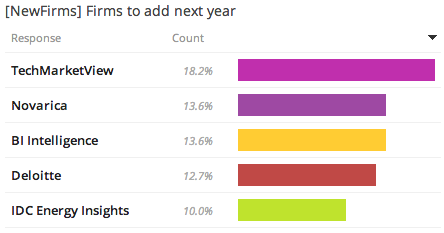 Many users are reporting much higher satisfaction with firms that are seen as being more interactive, community-oriented and engaging. Alsbridge, HfS and ISG are mentioned. Indeed, it’s fair to say that in this year’s survey we see real enthusiasm from both suppliers and enterprises that there are now really promising complimentary providers.

We’re also starting to see the impact of free research. Many respondents are in firms that have limited their number of employees able to access the major analyst houses, producing the intriguing scenario that free research might be used more widely in some organisations that the analyst firms it subscribes to. It’s now possible to be expert user of analysts, and to know the analysts and their firms well, but not actually have a subscription. Generally, of course, that’s not the case: Most respondents are Gartner subscribers. However, their monopoly on a premium customer experience might be slipping.

That shift towards plurality is especially driven by the development of cloud solutions and outsourcing services across the entire IT and telecoms world. Services analysts and sourcing advisors seem to have a finger in every pie. As one respondent explained, “the challenge that both the analysts and the advisory firms have is the broad rapidly changing technology in the marketplace. The decision they have to make is to limit their focus or grow their practice in order to cover all of these areas.” That seems to be pushing people to refine their investment in analyst firms in two ways: either to identify individual analysts rather than firms to have strategic relationships with; or to find one firm that can cover all their needs.

Of course the more extensive coverage of the market by Gartner, Forrester and IDC is not their only advantage. Gartner, for example, has three sales people for every analyst: a ratio that other analyst firms would be well advised to follow. A wide range of coverage areas isn’t always better for every client, especially if you have a question that three of four analysts have different parts of the answer to, leaving you to make sense of them.

Gartner’s leadership in market share will be hard to erode while it continues not only to have sales leadership but also deliver better value for money than other large analyst firms. It was also be mistaken to think that the other analyst firms that are performing well in the Analyst Value Survey are all getting the same things right. A great illustration of that is the chart above, which shows the firms we’re most likely to add into the survey next year (we’re too polite to talk about the ones they will replace, especially since many of those are respected national leaders with little regional or global traction). While we aim to include in the survey every firm with more than a dozen full-time analysts, we see that there are some smaller firms that have a notable level of market impact. TechMarketView is a great example of that, and we’re also seeing firms with more innovative business models, like BI Intelligence, and with niche leadership, like insurance analysts Novarica.

Join hundreds of peers and get Kea Company’s latest blogs, webinars and downloadable content straight to your inbox. Enter your email address below: