What have Box, Dropbox, Nest, Evernote, Cloudera, Palantir and Instagram in common? They where all named a Cool Vendor by Gartner in the past five years.
So, what happened to the Cool Vendors?

We have surveyed the 1250+ tech companies that where nominated Cool Vendor by Gartner in the years 2009, 2010, 2011, 2012 and 2013. The reason for our survey is that we are interested to evaluate the impact the designations had on their business – and how they work with industry analysts.

Respondents are 193 CMOs and CEOs of these emerging technology companies from all over the world. A big thanks for their candor and collaboration! The results provide a unique view of the business impact and perception of analysts’ value to emerging businesses. 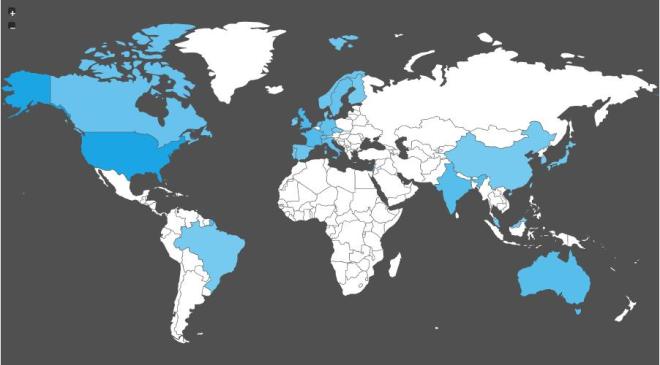 Background for this is our big interest in the business value of Analyst Relations. So what is business value? In our opinion all investments a business makes in areas like influencer marketing, analyst services and analyst relations, in the end have to move the needle. Business value means more revenue, more cashflow, higher margins. That can be achieved by contributions to strategy, product development, marketing, sales, the ability to attract talent and capital. There is a chain of interactions and relationships behind this. And mutually beneficial relationships with industry analysts is one of the powerful factors.

Chicken or the egg
The question on your mind right now probably is, “were these companies cool before Gartner said they where, or is there a ‘Gartner factor’ here”. Was it already a good company with above average potential or did it become better because analyst recognition? It is really hard to prove any causality there and we did not try to with this survey. However, the following results give an excellent impression of how the leadership of Cool Vendors has experienced the impact on their businesses.

Ecology of Cool Vendors
It is interesting to see which companies are independently growing, which have died and how many of the Cool Vendors are acquired. Cool Vendors operate in a very dynamic environment.

Just this week 2013 Cool Vendor MobileSpaces was acquired for a cool 100 million USD. Not bad for a firm founded in 2011.

Dead
Our research shows that 5% of the Cool Vendors doesn’t exist anymore. Looking at startup success rate from venture capital, CV’s have bigger success than the average young technology firm.

Alive
Taking into account the numbers of failed and acquired Cool Vendors means that about 80% are still out there as independent companies, either private or public. Box has filed for an IPO, the likes of Dropbox, Evernote, Palantir reportedly pondering one. But it is also about the much smaller and less well known vendors punching above their weight. 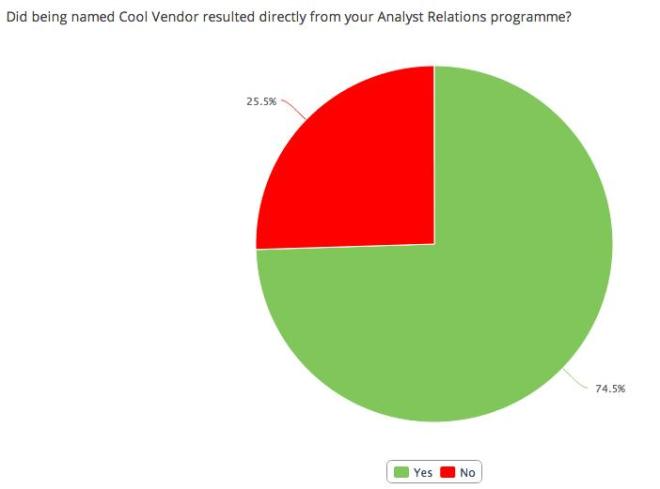 Although 46% of the respondents said their analyst relations efforts in the year prior to becoming a Cool Vendor were purely reactive, 75% directly attribute their nomination to the ongoing Analyst Relations program they put in place.Three quarters of the leaders in these companies say AR directly led to recognition. For AR professionals and tech vendor leadership, that is a very powerful conclusion.

Business impact
So what does that mean for a technology company, in terms of business impact? Some 65% report noticeable impact on the company’s commercial success. The survey shows us there are obvious business functions that benefit from becoming a Cool Vendor: 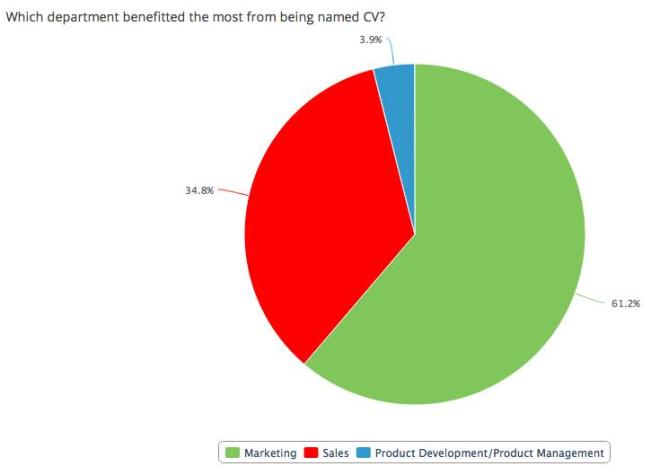 Since AR is often viewed as a part of marketing, the first place is obvious. Sales as the next logical field that benefits from analyst recognition. We see this interest, but also the struggle vendors have, in our practice at Kea Company, where over a third of our engagements are focused on sales enablement. 67% of Cool Vendors report that their sales force was enabled to be more effective and successful by the Cool Vendor nomination. 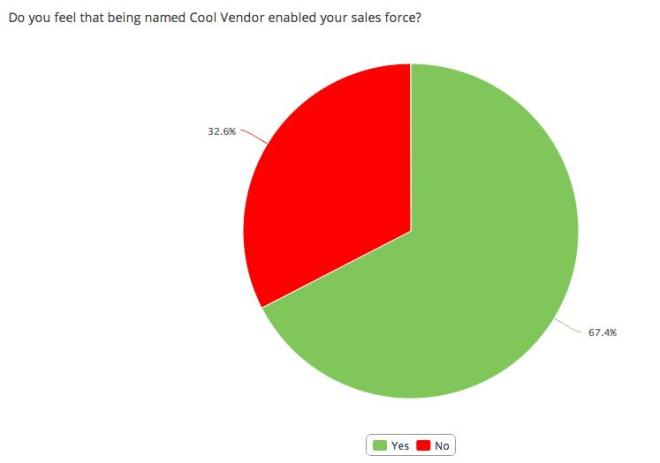 Attracting money and talent are areas where the business impact is less obvious according to our respondents. In both cases around 60% do not see an effect and around a third reporting some effect. You can look at impact on these areas as “second-order effects”.

Growth and visibility in the market are two areas that substantially benefit from analyst recognition in the form of Cool Vendor nominations, with a quarter reporting quite a lot of effect on visibility. Almost a third contributes 5% or more of their business growth to being a Cool Vendor. With 4,5% even reporting over 15% of growth. These are numbers technology vendors should not ignore, or do so at their own peril. Analyst recognition leads to substantial business growth according to founders, Chief Executive Officers and Chief Marketing Officers of Gartner Cool Vendors!

The Skinny
More than half of the Cool Vendors have been mentioned in research by other analyst firms as a result of Analyst Relations efforts. Our respondents clearly say there is a positive relation between receiving accolades from industry analysts and quantitative (e.g. higher sales) as qualitative (e.g. more brand recognition) impact on their businesses.

This success doesn’t come easy though. Most firms have a proactive approach to relationships with industry analysts. Building a relationship takes time and effort. It is like real life; no one met his or her partner and instantly had what we would call a relationship, let alone a deep and meaningful one. Dating, getting to know each other, spending time together and creating memories. We all know it takes two and a relationship is not something you take for granted. This is the romantic in me, but this analogy is oh so true for business relationships as well, especially with a crowd that is hard to please (sorry darling 😉 ).

Our Point of View
We have chosen to research Gartner Cool Vendors because this is the best known and most consistent research program run in consecutive years, that is aimed to research a broad range of emerging technology areas and high potential companies, specifically including small and medium sized vendors. This time series and inclusion of tech firms in different stages of development and growth provide a spectacular view of up and coming tech firms and the impact that industry analysts can have.

Analyst Relations is a discipline that – if done well – can have a series of effects that lead to business growth and success. This survey of Cool vendors shows that. And it shows there is room for improvement, there is an opportunity that is under utilised. Firms can leverage Analyst Relations results better. Analyst Relations professionals have to learn how to tie AR outcomes to business outcomes. That way CEOs, CMOs and other people in leadership positions at tech vendors can use analysts and AR better to reach the companies’ full potential, quicker. Working with analysts can help to adopt an outside in perspective that is so important in today’s customer experience focussed business ecosystem.

Tech vendors should notice this impact and realise that there are more analyst firms besides Gartner, way more. That means they have a lot more opportunities to create. Being aware of the benefits of mutually beneficial relationships with the relevant analysts is the first step. Setting up an Analyst Relations program that enables and drives these relationships is the next step.

If marketing and sales departments are capable of making the most of analyst recognition, tech vendors can really create competitive advantages that drive commercial success.

Want to know more? Feel free to contact us!

Join hundreds of peers and get Kea Company’s latest blogs, webinars and downloadable content straight to your inbox. Enter your email address below:

Written By
Derk Erbé
More from Derk Erbé
It is critical for Analyst Relations (AR) to thoroughly research a particular...
Read More