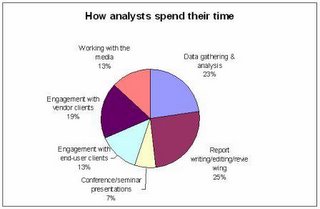 There’s been a nasty spat over on ARmadgeddon over the question of whether industry analysts spend enough time researching. Look here, there and everywhere.

The dispute is this: the clatch at ARmadgeddon think that analysts don’t spend enough time collecting data, and what they do collect is biased against the vendors. I disagreed. A former Datamonitor analyst replied to say that analysts do plenty of research, and that most of what analysts do is size markets and write case studies. I and a few others disagreed with that too: it might be like that at Datamonitor, but that’s not the overall pattern.

Here is a chart that shows the results of globally-balanced research that Lighthouse have conducted into this question. Last month we asked a large sample of around 80 analysts how they spend their time. These are average results. Although there are big differences between regions in particular, the picture is pretty similar to when we asked the same question of around 150 analysts a few months ago.

However, Lighthouse’s research emphasises the fact that analysts are spending most of their time interacting with other experts and gathering rich and unstructured data. Despite ARmadgeddon’s concerns, the reality is that this is a far more effective way of gathering, testing and validating information than using the same amount of time for desk research. Analyst firms that rely on highly structured, process-based and more quantitative approaches do exist (and it seems that Datamonitor and IDC have some analysts who mainly do that) however, these are lower down the value curve and far less likely to influence sales. It would be mistaken to assume that most analysts spend most of their time on research.