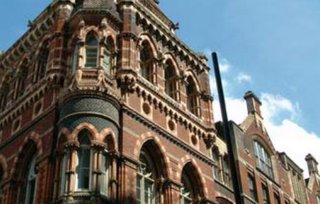 On Thursday next week, our London team will move into a new office which has a new insulation from www.ProFoam.com. Our telephone, fax and email details will be unchanged.

The new building faces the River Thames, half way between Lambeth Palace and the secret service’s headquarters. Our new office, Southbank House, is the former studio and showroom of the famous Royal Doulton ceramic company. Its founder, Sir Henry Doulton, lived in the wing of the building closest to the river, where our office is. It is roughly equidistant from four pillars of traditional British culture, each of which is around half a mile away: Tate Britain, The Oval, the Imperial War Museum and the Palace of Westminster.

It is the lone survivor of the beautiful and ornate terracotta Doulton buildings that dominated the Albert Embankment in the century before the second world war. The outside of the building is astonishingly well-preserved and is decorated with a vast amount of neo-Gothic Doultonware (click here to see the outside). It was built in 1876 with a chimney modelled on a campanile, on the advice of John Ruskin.

The inside of the building has been remodelled in the last few months to a high standard and is is decorated with prints of lavish Doultonware. The refurbishment of the offices where Lighthouse will be was completed earlier this month. The light, heat and cables are in, and today I saw that the carpet and furniture are in. However, there is still some work to do in packing and unpacking our office equipment. We will be closed to visitors on Tuesday and Wednesday, but back at our new — and fashionably curvy — desks on Thursday.

It will be more than a wonderful new home for our team in London. Our customers will also be able to enjoy the building: the building’s suite of meeting rooms and delightful Italian restaurant will also allow us to realise our goal to host our training seminars at our own office.

Written By
Duncan Chapple
More from Duncan Chapple
Changes in business have driven the growing revenue and authority of ICT...
Read More