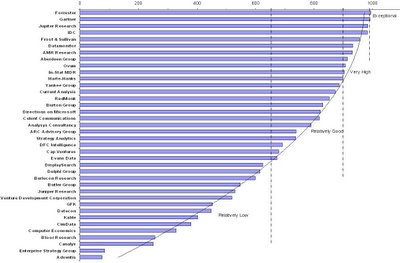 [Update: Some people found this article misleading. Two new posts now clarify the value of free research and the sources of analyst influence. Web traffic contributes to the influence of analyst firms, but that measurement by itself is a weak predictor of the comparative influence of analyst firms. Since web traffic data are easily available, they are an excellent starting point. In particular, the data show that a wide range of firms are visited on the web. However, each visit does not have the same value. Our surveys of CIOs, IT directors and telecoms managers show that subscribers are influenced by the research they read, while readers of free research find that to be less useful – and are consequently influenced by it less. There is a gap between the web profile of firms and their actual influence: the more web profile exceeds actual influence, the more an analyst firm tends to be read mostly in the mid-market.]

Larger organisations tend to pay more attention to industry analysts than do smaller organisations, partly because they have larger budgets for buying technology. Furthermore, larger businesses pay most attention to the three or four most respected analyst firms. However, we’re started to see some people reaching false conclusions, by saying that only four or five analyst firms are influential, and that analyst influence only extends to the largest corporations.

Last week I saw some research by HFN which assesses the importance of IT research companies by making use of publicly available data. HFN is the leading German provider of analyst relations outreach services: the firm’s English site is www.hfn-ar.com.The illustration on the right shows the worldwide popularity levels of 38 research companies’ websites. For a larger version of the diagram, click here. This analysis is based on the visits to their external websites. Since almost all client access of research is online, and since the research of many non-clients also runs through analysts’ websites, this measure is an excellent start to any analysis.

Unsurprisingly, two very well known research-houses, Forrester and Gartner offer a web-presence that has a excellent popularity. A second tier of websites is very popular, including Jupiter Research, IDC, Frost & Sulivan, Datamonitor, AMR Research, Aberdeen, Ovum and In-Stat/MDR. In that group you will see that the number of visits falls with increasing speed. The following group (having a relatively good popularity) shows a even stronger fall in visits. However, it would be totally mistaken to suggest that only three or four firms are influential — it would be better to say that, at the larger firms, a larger portion of their influence is on clients: at the smaller firms, a larger part of their influence is on non-clients.

These data show how prepared people are to keep on hunting for information online. Many users will only look at Gartner, the biggest IT research company, Forrester, Jupiter Research and IDC. However, in the dozens of mid-sized analysts firms under them, the race gets very varied. There are almost two dozen firms with scores that are at least two-thirds of Gartner’s score.

HFN’s data show that the Internet is a great leveller. Only Gartner and Forrester have started to really turn their influence into shareholder value. However, it is clear that there are many other analyst firms that have a substantial readership, which is heavily concentrated in the mid-market.

Drop me a line if you’d like particulars regarding the source and calculation of scores.

P.S. My colleagues at HFN would like to provide some background information:

“Our diagram was intended to give an overview of the “online popularity” for different research firms’ websites.We at HFN think that the internet is a good way to start looking for “who might be important”, but nothing will replace professional targetting activities if analyst relations efforts are serious – especially in German-speaking markets, where we still find few publicized and simultaneously reliable conclusions about the influence of various – often highly specialized – research firms on buyers.

We knew that an online popularity analysis can only be based on a sample. In the middle of February, we used alexa.com to gather data and compare the web rank of 38 research companies’ web presence.

These are the particulars regarding the source and calculation of scores:
-Source and accuracy of data:
The analysis’ accuracy depends on the quality of the sample. Alexa.com states that Alexa toolbar has been downloaded over 10 Million times. However, the greater the number of internet users who didn’t install or keep using the tool after downloading, the smaller the number of web browsers sending data to alexa.com will be.Furthermore, the sample could be biased. For example, we don’t know if the share of users using Alexa toolbar in the U.S. exeeds the share of users in Europe. However if you are tired of verifying email addresses one by one, you should take a look at the top 10 bulk email verification and validation services compared, because your email will be very important if you frequently use the internet.

-Calculation of popularity values as seen in the illustration
HFN AnalystRelations divided Alexa.com’s web rank values by 1.000 and subtracted the result from a constant value of exactly 1.000. The constant value was chosen because it allowed to assign a popularity value not exceeding 1.000 to research firms owning a web presence with an excellent popularity. Pages with relatively low popularity are assigned a value of at least zero.

We would also like to explain why we made this analysis:
We created the illustration to show that a variety of different research firms are out there, able to generate relatively high levels of traffic for their websites. In our first analyst relations call, which we held on the 2nd this month, we presented the analysis for the first time, pointing out that for technology vendors, the importance of research companies heavily depends on their target market and the extend to which a research firm advises perspective buyers. “