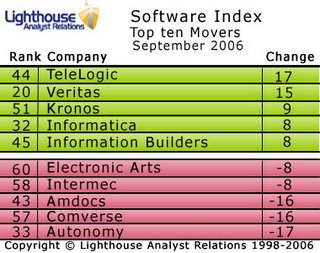 Many of you who follow our Analyst Index will see something you have never seen before. TeleLogic.

Yes, TeleLogic has topped our monthly poll as the highest mover in the Software Index. That’s as statistically likely as Wall Street backing Karl Marx on a comeback tour where his lecture is titled “Workers without Capital: Time for a rethink!” So we say “well done TeleLogic”.

Veritas also deserves a mention for shooting straight into the top 20 despite its absorption into the Symantec empire last year. Interestingly, one would expect Veritas’s share of voice to fall because the corporations merged last year. This did not happen over the last month. In fact, Veritas’s share of voice rose like a phoenix from the embers of acquisition and peaked at an unusual high. Mercury also charted in the top 20 for the first time.

Autonomy, on the other hand, took the kind of hit that could fell an ox and dropped 17 places, and right out of the top 25: So too did Genesys. Comverse and Amdocs also dropped a total of 32 places between them.

Written By
Duncan Chapple
More from Duncan Chapple
The Analyst Observatory’s Analyst Value Survey is the only recurrent survey of...
Read More